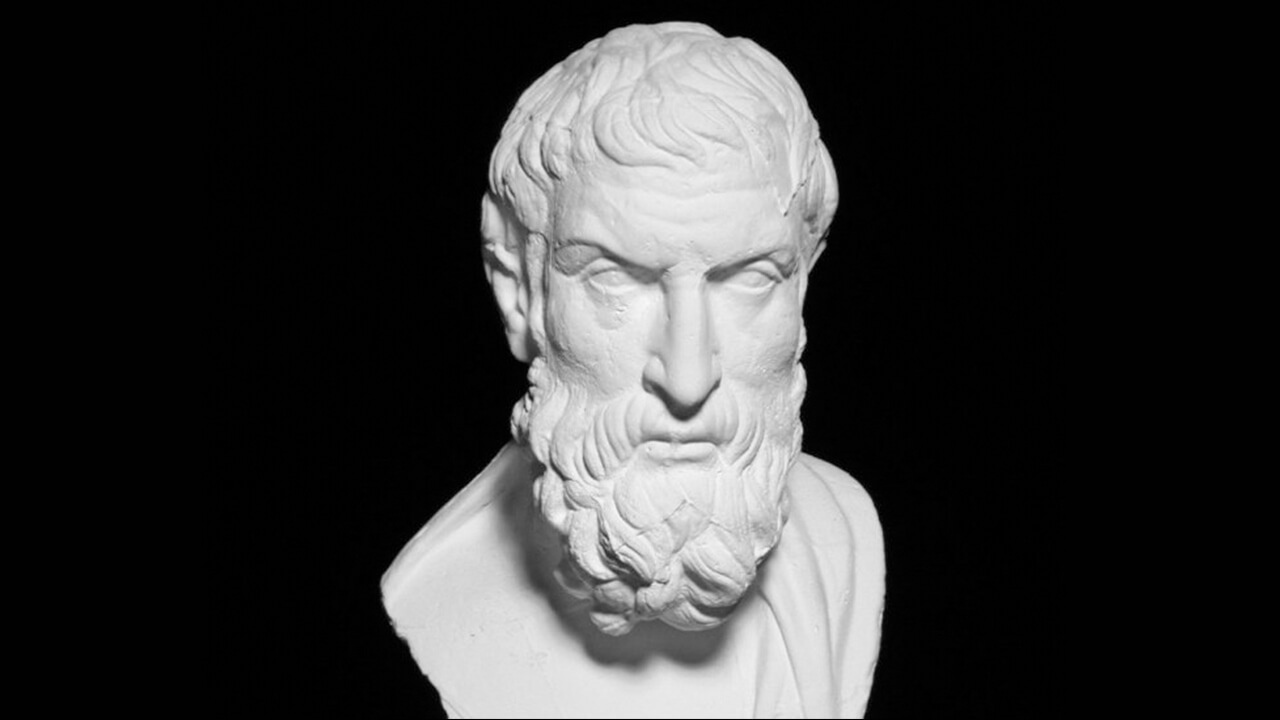 Epictetus was born in 50 AD, Hierapolis, Turkey, and died in 135 AD, Nicopolis, Greece. He believed that philosophy was a way of life & not just a theoretical discipline.

Is freedom anything else than the right to live as we wish? Nothing else. – Epictetus

It’s not what happens to you, but how you react to it that matters. – Epictetus

You may fetter my leg, but Zeus himself cannot get the better of my free will. – Epictetus

Events do not just happen but arrive by appointment. – Epictetus

Circumstances don’t make the man, they only reveal him to himself. – Epictetus

It is impossible for a man to learn what he thinks he already knows. – Epictetus

The philosopher’s school, ye men, is a surgery: you ought not to go out of it with pleasure, but with pain. For you are not in sound health when you enter. – Epictetus

As a man, casting off worn-out garments taketh new ones, so the dweller in the body, entereth into ones that are new. – Epictetus

“Give me, by all means, the shorter and nobler life, instead of one that is longer but of less account!” – Epictetus

For it is not death or pain that is to be feared, but the fear of pain or death. – Epictetus

Seek not the good in external things; seek it in yourselves. – Epictetus

Men are disturbed not by the things which happen, but by the opinion about the things. – Epictetus

Freedom is not procured by a full enjoyment of what is desired, but by controlling the desire. – Epictetus

No one is ever unhappy because of someone else. – Epictetus

No man is free until he s a master of himself!! – Epictetus

Either God wants to abolish evil, and cannot, or he can, but does not want to. – Epictetus

If you seek Truth, you will not seek to gain a victory by every possible means; and when you have found Truth, you need not fear being defeated. – Epictetus

It is better to die of hunger having lived without grief and fear than to live with a troubled spirit, amid an abundance – Epictetus

Nothing great comes into being all at once, for that is not the case even with a bunch of grapes or a fig. If you tell me now, ‘I want a fig,’ I’ll reply, ‘That takes time. – Epictetus

We have two ears and one mouth so that we can listen twice as much as we speak. – Epictetus

Wealth consists not in having great possessions, but in having few wants. – Epictetus

Epictetus being asked how a man should give pain to his enemy answered, By preparing himself to live the best life that he can. – Epictetus

If you wish to be a writer, write. – Epictetus

Imagine for yourself a character, a model personality, whose example you determine to follow, in private as well as in public. – Epictetus

Take care not to hurt the ruling faculty of your mind. If you were to guard against this in every action, you should enter upon those actions more safely. – Epictetus

A city is not adorned by external things, but by the virtue of those who dwell in it. – Epictetus

Small-minded people blame others. Average people blame themselves. The wise see all blame as foolishness – Epictetus

An ignorant person is inclined to blame others for his own misfortune. To blame oneself is proof of progress. But the wise man never has to blame another or himself. – Epictetus

[Do not get too attached to life] for it is like a sailor’s leave on the shore and at any time, the captain may sound the horn, calling you back to eternal darkness. – Epictetus

People are not disturbed by things, but by the views, they take of them. – Epictetus

Know you not that a good man does nothing for appearance’s sake, but for the sake of having done right? – Epictetus

I must die. Must I then die lamenting? I must be put in chains. Must I then also lament? I must go into exile. Does any man then hinder me from going with smiles and cheerfulness and contentment? – Epictetus

The essence of philosophy is that a man should so live that his happiness shall depend as little as possible on external things. – Epictetus

Freedom is the only worthy goal in life. It is won by disregarding things that lie beyond our control. – Epictetus

What really frightens and dismays us is not external events themselves, but the way in which we think about them. It is not things that disturb us, but our interpretation of their significance. – Epictetus

Other people’s views and troubles can be contagious. Don’t sabotage yourself by unwittingly adopting negative, unproductive attitudes through your associations with others. – Epictetus

If someone speaks badly of you, do not defend yourself against the accusations, but reply; “you obviously don’t know about my other vices, otherwise you would have mentioned these as well – Epictetus

Keep the prospect of death, exile, and all such apparent tragedies before you every day – especially death – and you will never have an abject thought or desire anything to excess. – Epictetus

The key is to keep company only with people who uplift you, whose presence calls forth your best. – Epictetus

For sheep don’t throw up the grass to show the shepherds how much they have eaten; but, inwardly digesting their food, they outwardly produce wool and milk. – Epictetus

-….when things seem to have reached that stage, merely say “I won’t play any longer”, and take your departure; but if you stay, stop lamenting. – Epictetus

Nature hath given men one tongue but two ears, that we may hear from others twice as much as we speak. – Epictetus

He is a wise man who does not grieve for the things which he has not, but rejoices for those which he has. – Epictetus

If any be unhappy, let him remember that he is unhappy by reason of himself alone. For God hath made all men enjoy felicity and constancy of good. – Epictetus

Preach not to others what they should eat, but eat as becomes you and be silent. – Epictetus

It is our attitude toward events, not events themselves, which we can control. Nothing is by its own nature calamitous — even death is terrible only if we fear it. – Epictetus

“First say to yourself what you would be; and then do what you have to do.” – Epictetus

“Any person capable of angering you becomes your master; he can anger you only when you permit yourself to be disturbed by him.” – Epictetus

Only the educated are free. – Epictetus

I laugh at those who think they can damage me. They do not know who I am, they do not know what I think, they cannot even touch the things which are really mine and with which I live. – Epictetus

Don’t seek to have events happen as you wish, but wish them to happen as they do happen, and all will be well with you. – Epictetus

If thy brother wrongs thee, remember not so much his wrong-doing, but more than ever that he is thy brother. – Epictetus

Demand not that things happen as you wish, but wish them to happen as they do, and you will go on well. – Epictetus

There is only one way to happiness and that is to cease worrying about things which are beyond the power of our will. – Epictetus

He who laughs at himself never runs out of things to laugh at. – Epictetus

Control thy passions lest they take vengeance on thee. – Epictetus

No great thing is created suddenly, any more than a bunch of grapes or a fig. If you tell me that you desire a fig, I answer that there must be time. Let it first blossom, then bear fruit, then ripen. – Epictetus

Attach yourself to what is spiritually superior, regardless of what other people think or do. Hold to your true aspirations no matter what is going on around you. – Epictetus

Whoever then would be free, let him wish for nothing, let him decline nothing, which depends on others; else he must necessarily be a slave. – Epictetus

What saith Antisthenes? Hast thou never heard?— It is a kingly thing, O Cyrus, to do well and to be evil spoken of. – Epictetus

The greater the difficulty, the more glory in surmounting it. Skillful pilots gain their reputation from storms and tempests. – Epictetus

It is better to do wrong seldom and to own it, and to act right for the most part than seldom to admit that you have done wrong and to do wrong often. – Epictetus

Crows pick out the eyes of the dead when the dead have no longer need of them, but flatterers mar the soul of the living, and her eyes they blind. – Epictetus

If anyone tells you that a certain person speaks ill of you, do not make excuses about what is said of you but answer, “He was ignorant of my other faults, else he would not have mentioned these alone. – Epictetus

Your happiness depends on three things, all of which are within your power: your will, your ideas concerning the events in which you are involved, and the use you make of your ideas. – Epictetus

Asked, Who is the rich man? Epictetus replied, He who is content. – Epictetus

If you want to improve, you must be content to be thought foolish and stupid. – Epictetus

Men are disturbed not by the things which happen, but by the opinions about the things: – Epictetus

There is but one way to tranquility of mind and happiness, and that is to account no external things thine own, but to commit all to God. – Epictetus

What concerns me is not the way things are, but the way people think things are. – Epictetus

Whoever is going to listen to the philosophers needs considerable practice in listening. – Epictetus

“It is not so much what happens to you as to how you think about what happens.” – Epictetus

If evil is said of thee, and if it is true, correct thyself; if it is a lie, laugh at it. – Epictetus

On the occasion of every accident that befalls you, remember to turn to yourself and inquire what power you have for turning it to use. – Epictetus

Be free from grief not through insensibility like the irrational animals, nor through want of thought like the foolish, but as a man of virtue by having reason as the consolation of grief. – Epictetus

Do not try to seem wise to others. – Epictetus

Everyone’s life is a warfare, and that long and various. – Epictetus