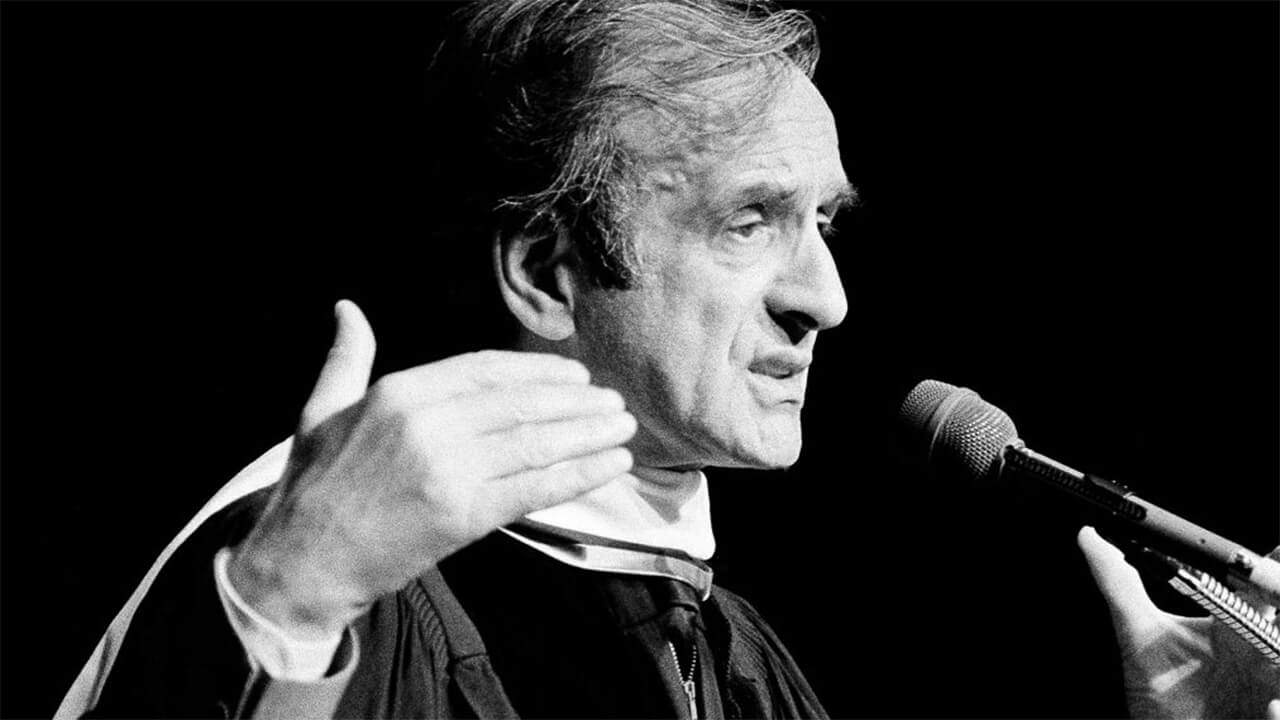 There are victories of the soul and spirit. Sometimes, even if you lose, you win. – Elie Wiesel

There may be times when we are powerless to prevent injustice, but there must never be a time when we fail to protest. – Elie Wiesel

Wherever men and women are persecuted because of their race, religion, or political views, that place must – at that moment – become the center of the universe. – Elie Wiesel

I have not lost faith in God. I have moments of anger and protest. Sometimes I’ve been closer to him for that reason. – Elie Wiesel

In Jewish history, there are no coincidences. – Elie Wiesel

When a person doesn’t have gratitude, something is missing in his or her humanity. A person can almost be defined by his or her attitude toward gratitude. – Elie Wiesel

Words can sometimes, in moments of grace, attain the quality of deeds. – Elie Wiesel

I decided to devote my life to telling the story because I felt that having survived I owe something to the dead. and anyone who does not remember betrays them again. – Elie Wiesel

It all happened so fast. The ghetto. The deportation. The sealed cattle car. The fiery altar upon which the history of our people and the future of mankind were meant to be sacrificed. – Elie Wiesel

We have to go into the despair and go beyond it, by working and doing for somebody else, by using it for something else. – Elie Wiesel

Hope is like peace. It is not a gift from God. It is a gift only we can give one another. – Elie Wiesel

In any society, fanatics who hate don’t hate only me – they hate you, too. They hate everybody. – Elie Wiesel

I was very, very religious. And of course, I wrote about it in ‘Night.’ I questioned God’s silence. So I questioned. I don’t have an answer for that. Does it mean that I stopped having faith? No. I have faith, but I question it. – Elie Wiesel

For me, every hour is grace. And I feel gratitude in my heart each time I can meet someone and look at his or her smile. – Elie Wiesel

I marvel at the resilience of the Jewish people. Their best characteristic is their desire to remember. No other people have such an obsession with memory. – Elie Wiesel

After all, God is God because he remembers. – Elie Wiesel

My greatest disappointment is that I believe that those of us who went through the war and tried to write about it, about their experience, became messengers. We have given the message, and nothing changed. – Elie Wiesel

No human race is superior; no religious faith is inferior. All collective judgments are wrong. Only racists make them. – Elie Wiesel

Our obligation is to give meaning to life and in doing so to overcome the passive, indifferent life. – Elie Wiesel

Friendship marks a life even more deeply than love. Love risks degenerating into obsession, friendship is never anything but sharing. – Elie Wiesel

Most people think that shadows follow, precede, or surround beings or objects. The truth is that they also surround words, ideas, desires, deeds, impulses, and memories. – Elie Wiesel

Someone who hates one group will end up hating everyone – and, ultimately, hating himself or herself. – Elie Wiesel

When a person doesn’t have gratitude, something is missing in his or her humanity. – Elie Wiesel

Indifference, to me, is the epitome of evil. – Elie Wiesel

Mankind must remember that peace is not God’s gift to his creatures; peace is our gift to each other. – Elie Wiesel

One always goes back to one’s childhood in the beginning, and I come from a very religious family and surroundings. Very religious. – Elie Wiesel

The Bible is not only laws, it’s also stories. – Elie Wiesel

When language fails, violence becomes a language; I never had that feeling. – Elie Wiesel

For in my tradition, as a Jew, I believe that whatever we receive we must share. – Elie Wiesel

When I was young I lost everything. – Elie Wiesel

Religion is a very personal thing for me. Religion has its good moments and its poor moments. – Elie Wiesel

I’ve given my life to the principle and the ideal of memory, and remembrance. – Elie Wiesel

Look, if I were alone in the world, I would have the right to choose despair, solitude, and self-fulfillment. But I am not alone. – Elie Wiesel

The Bible is not only laws, it’s also stories. It begins, ‘In the beginning God created Heaven.’ If I had written these words, I wouldn’t have written anything else; it’s just enough. – Elie Wiesel

If I were in the government, I would persuade the prime minister to see the beauty in the fact that people see Israel as a haven – from their sadness to their hope. – Elie Wiesel

No one may speak for the dead, no one may interpret their mutilated dreams and visions. – Elie Wiesel

Sometimes I am asked if I know ‘the response to Auschwitz; I answer that not only do I not know it but that I don’t even know if a tragedy of this magnitude has a response. – Elie Wiesel

That is my major preoccupation, memory, the kingdom of memory. I want to protect and enrich that kingdom, glorify that kingdom, and serve it. – Elie Wiesel

If I were immersed in constant melancholy, I would not be who I am. – Elie Wiesel

Man, as long as he lives, is immortal. One minute before his death he shall be immortal. But one minute later, God wins. – Elie Wiesel

It used to be said that when the Baal Shem Tov came into a town, his impact was so strong, he didn’t have to speak. His disciples had to dance or to sing or to preach to have the same effect. I think a real messenger, myself, or anyone, by the very fact, that he is there as a person, as a symbol, could have the same impact. – Elie Wiesel

That I survived the Holocaust and went on to love beautiful girls, to talk, to write, to have toast and tea, and live my life – that is what is abnormal. – Elie Wiesel

Moses was the greatest legislator and the commander in chief of perhaps the first liberation army. – Elie Wiesel

I have to be self-conscious about what I’m trying to do with my life. – Elie Wiesel

It’s clear to me that one can’t be Jewish without Israel. Religious or non-religious, Zionist or non-Zionist, Ashkenazi or Sephardic – all these will not exist without Israel. – Elie Wiesel

I believe in superstitions. You don’t talk about a child who hasn’t been born. – Elie Wiesel

I do not recall a Jewish home without a book on the table. – Elie Wiesel

I do not belong to this world. I continue to write everything in longhand. If I have to see something on the Internet, I ask my secretary or students. I am lucky because I have people who do it for me. – Elie Wiesel

I don’t know much about politics, and I don’t want to know. That’s why I rarely involve myself in politics. – Elie Wiesel

I wanted to write a commentary on the Bible, to write about the Talmud, about celebration, about the great eternal subjects: love and happiness. – Elie Wiesel

I would like to see real peace and a state of Israel living peacefully alongside a state of Palestine. – Elie Wiesel

What does mysticism really mean? It means the way to attain knowledge. It’s close to philosophy, except in philosophy you go horizontally while in mysticism you go vertically. – Elie Wiesel

Historically, I come from Jewish history. I had the classic upbringing in the Yeshiva, learning, learning, and more learning. – Elie Wiesel

I’m a teacher and a writer; my life is words. When I see the denigration of language, it hurts me, and it’s easy to denigrate a word by trivializing it. – Elie Wiesel

I never felt any attraction to violence. I never tried to express myself through violence. Violence is a language. – Elie Wiesel

Now, when I hear that Christians are getting together in order to defend the people of Israel, of course, it brings joy to my heart. And it simply says, look, people have learned from history. – Elie Wiesel

In the concentration camps, we discovered this whole universe where everyone had his place. The killer came to kill, and the victims came to die. – Elie Wiesel

I remember, May 1944: I was 15-and-a-half, and I was thrown into a haunted universe where the story of the human adventure seemed to swing irrevocably between horror and malediction. – Elie Wiesel

I’ll tell you what: I believe mysticism is a very serious endeavor. One must be equipped for it. – Elie Wiesel

Language failed me very often, but then, the substitute for me was silence, but not violence. – Elie Wiesel

In my tradition, one must wait until one has learned a lot of the Bible and Talmud, and the Prophets to handle mysticism. This isn’t instant coffee. There is no instant mysticism. – Elie Wiesel

When did I learn the Bible? When I was four or five years old. It’s still the pull of my childhood, a fascination with the vanished world, and I can find everything except that world. – Elie Wiesel