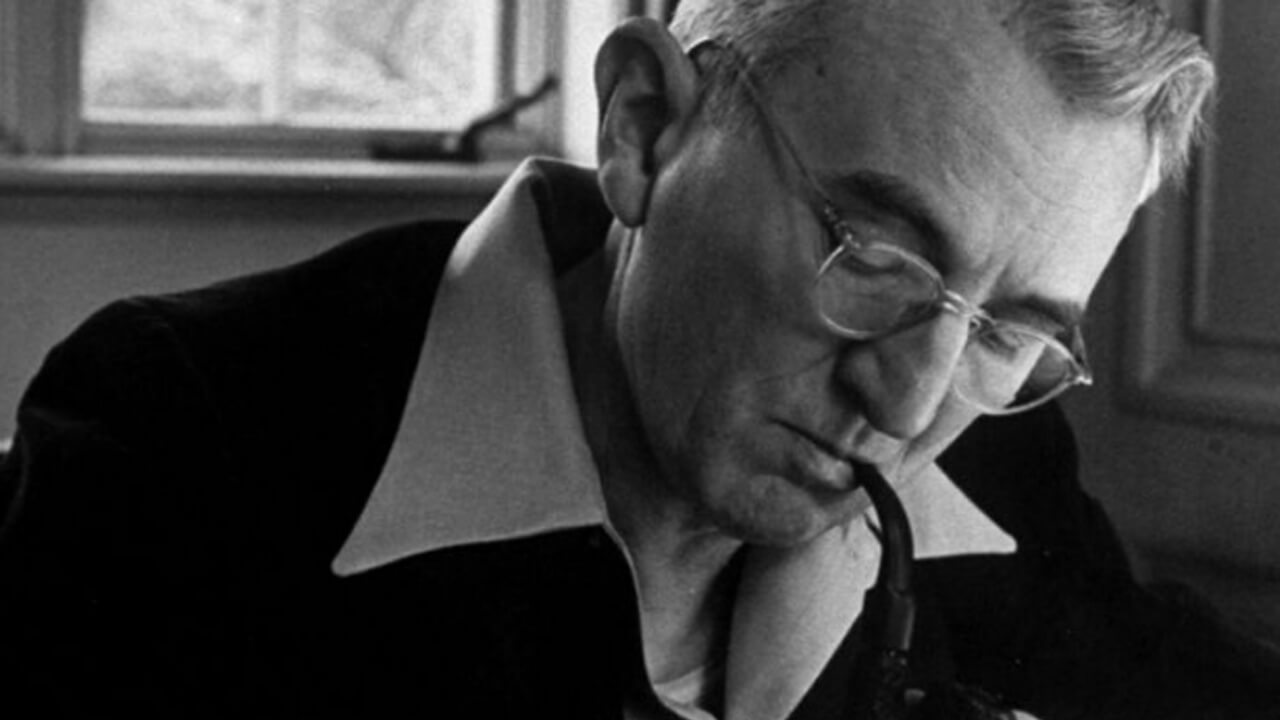 Dale Carnegie was an American writer and lecturer. We have shared inspirational and motivational Dale Carnegie quotes on success, happiness, communication.

“People rarely succeed unless they have fun in what they are doing.” – Dale Carnegie

“Our fatigue is often caused not by work, but by worry, frustration, and resentment.” – Dale Carnegie

“Talk to someone about themselves and they’ll listen for hours.” – Dale Carnegie

“If you tell me how you get your feeling of importance, I’ll tell you what you are.” – Dale Carnegie

“Two men looked out from prison bars, one saw the mud, the other saw stars.” – Dale Carnegie

“The ideas I stand for are not mine. I borrowed them from Socrates. I swiped them from Chesterfield. I stole them from Jesus. And I put them in a book. If you don’t like their rules, whose would you use?” – Dale Carnegie

“A man convinced against his will is of the same opinion still.” – Dale Carnegie

“Let’s not allow ourselves to be upset by small things we should despise and forget. Remember ‘Life is too short to be little.” – Dale Carnegie

“Tell the audience what you’re going to say, say it; then tell them what you’ve said.” – Dale Carnegie

“The world is full of people who are grabbing and self-seeking. So the rare individual who unselfishly tries to serve others has an enormous advantage.” – Dale Carnegie

“A barber lathers a man before he shaves him.” – Dale Carnegie

“If you can’t sleep, then get up and do something instead of lying there and worrying. It’s the worry that gets you, not the loss of sleep.” – Dale Carnegie

“Do you remember the things you were worrying about a year ago? How did they work out? Didn’t you waste a lot of fruitless energy on account of most of them? Didn’t most of them turn out all right after all?” – Dale Carnegie

“We all have possibilities we don’t know about. We can do things we don’t even dream we can do.” – Dale Carnegie

“If you tell me how you get your feeling of importance, I’ll tell you what you are.” – Dale Carnegie

“All men have fears, but the brave put down their fears and go forward, sometimes to death, but always to victory.” – Dale Carnegie

“Today is our most precious possession. It is our only sure possession.” – Dale Carnegie

“Flattery is telling the other person precisely what he thinks about himself.” – Dale Carnegie

“Control your temper. Remember, you can measure the size of a person by what makes him or her angry.” – Dale Carnegie

“Actions speak louder than words, and a smile says, ‘I like you. You make me happy. I am glad to see you.” – Dale Carnegie

“Don’t be afraid to give your best to what seemingly are small jobs. Every time you conquer one it makes you that much stronger. If you do the little jobs well, the big ones will tend to take care of themselves.” – Dale Carnegie

“Most of the important things in the world have been accomplished by people who have kept on trying when there seemed to be no hope at all.” – Dale Carnegie

“If you argue and rankle and contradict, you may achieve a victory sometimes; but it will be an empty victory because you will never get your opponent’s goodwill.” – Dale Carnegie

“One of the tragic things I know about human nature is that all of us tend to put off living. We are all dreaming of some magical rose garden over the horizon – instead of enjoying the roses that are blooming outside our windows today.” – Dale Carnegie

“Personally I am very fond of strawberries and cream, but I have found that for some strange reason, fish prefer worms. So when I went fishing, I didn’t think about what I wanted. I thought about what they wanted. I didn’t bait the hook with strawberries and cream. Rather, I dangled a worm or grasshopper in front of the fish and said: “Wouldn’t you like to have that?” Why not use the same common sense when fishing for people?” – Dale Carnegie

“Don’t be afraid of enemies who attack you. Be afraid of the friends who flatter you.” – Dale Carnegie

“You can conquer almost any fear if you will only make up your mind to do so. For remember, fear doesn’t exist anywhere except in the mind.” – Dale Carnegie

“The difference between appreciation and flattery? That is simple. One is sincere and the other insincere. One comes from the heart out; the other from the teeth out. One is unselfish; the other selfish. One is universally admired; the other universally condemned.” – Dale Carnegie

Inaction breeds doubt and fear. Action breeds confidence and courage. If you want to conquer fear, do not sit home and think about it. Go out and get busy.” – Dale Carnegie

“When the fierce, burning winds blow over our lives – and we cannot prevent them – let us, too, accept the inevitable. And then get busy and pick up the pieces.” – Dale Carnegie

“I have come to the conclusion that there is only one way under high heaven to get the best of an argument— and that is to avoid it. Avoid it as you would avoid rattlesnakes and earthquakes.” – Dale Carnegie

“Any fool can criticize, complain, and condemn—and most fools do. But it takes character and self-control to be understanding and forgiving.” – Dale Carnegie

“When the fierce, burning winds blow over our lives – and we cannot prevent them – let us, too, accept the inevitable. And then get busy and pick up the pieces.” – Dale Carnegie

“Inaction breeds doubt and fear. Action breeds confidence and courage. If you want to conquer fear, do not sit home and think about it. Go out and get busy.” – Dale Carnegie

“Develop success from failures. Discouragement and failure are two of the surest stepping stones to success.” – Dale Carnegie

“Instead of condemning people, let’s try to understand them. Let’s try to figure out why they do what they do. That’s a lot more profitable and intriguing than criticism; and it breeds sympathy, tolerance, and kindness. To know all is to forgive all.” – Dale Carnegie

“The ideas I stand for are not mine. I borrowed them from Socrates. I swiped them from Chesterfield. I stole them from Jesus. And I put them in a book. If you don’t like their rules, whose would you use?” – Dale Carnegie

“It isn’t what you have or who you are or where you are or what you are doing that makes you happy or unhappy. It is what you think about it.” – Dale Carnegie

“When I asked him – Mr.Henry Ford – if he ever worried, he replied: “No. I believe God is managing affairs and that He doesn’t need any advice from me. With God in charge, I believe that everything will work out for the best in the end.” So what is there to worry about?” – Dale Carnegie

“Even God doesn’t propose to judge a man till his last days, why should you and I?” – Dale Carnegie

“Take a chance! All life is a chance. The man who goes farthest is generally the one who is willing to do and dare. The sure-thing boat never gets far from shore.” – Dale Carnegie

“If you believe in what you are doing, then let nothing hold you up in your work. Much of the best work in the world has been done against seeming impossibilities.” – Dale Carnegie

“Instead of worrying about what people say of you, why not spend time trying to accomplish something they will admire.” – Dale Carnegie

“When we hate our enemies, we are giving them power over us: power over our sleep, our appetites, our blood pressure, our health, and our happiness.” – Dale Carnegie

“Be wiser than other people if you can, but do not tell them so.” – Dale Carnegie

“First ask yourself: What is the worst that can happen? Then prepare to accept it. Then proceed to improve on the worst.” – Dale Carnegie

“There are always three speeches, for every one you actually gave. The one you practiced, the one you gave, and the one you wish you gave.” – Dale Carnegie

“Today is the life-the only life you are sure of. Make the most of today. Get interested in something. Shake yourself awake. Develop a hobby. Let the winds of enthusiasm sweep through you. Live today with gusto.” – Dale Carnegie

“The best possible way to prepare for tomorrow is to concentrate with all your intelligence, all your enthusiasm, on doing today’s work superbly today. That is the only possible way you can prepare for the future.” – Dale Carnegie

“By fighting you never get enough, but by yielding you get more than you expected.” – Dale Carnegie

“Flaming enthusiasm, backed by horse sense and persistence, is the quality that most frequently makes for success.” – Dale Carnegie

“Everybody in the world is seeking happiness—and there is one sure way to find it. That is by controlling your thoughts. Happiness doesn’t depend on outward conditions. It depends on inner conditions.” – Dale Carnegie

“Control your temper. Remember, you can measure the size of a person by what makes him or her angry.” – Dale Carnegie

Do you love this Dale Carnegie quotes? If you love please don’t forget to share this inspirational quotes with your friends.