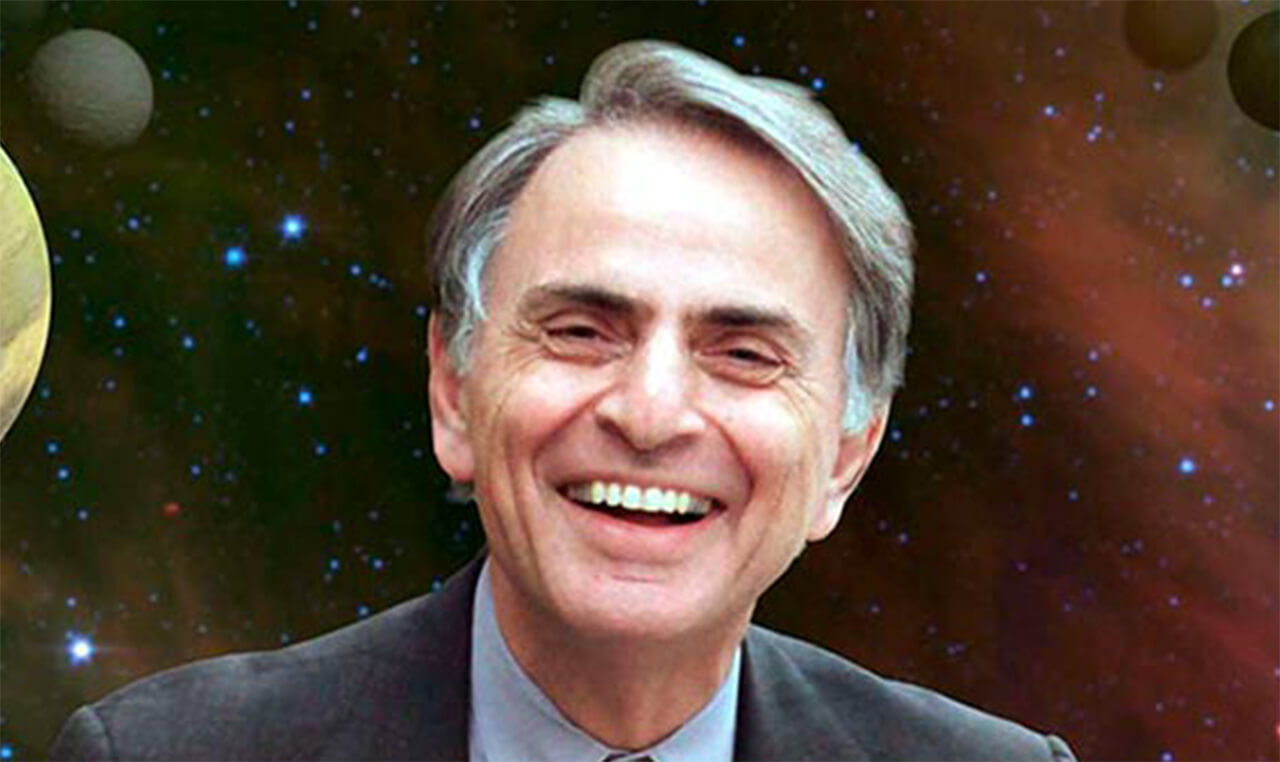 “The nuclear arms race is like two sworn enemies standing waist deep in gasoline, one with three matches, the other with five.” – Carl Sagan

“The nature of life on Earth and the search for life elsewhere are two sides of the same question—the search for who we are.”― Carl Sagan

“We must understand the Cosmos as it is and not confuse how it is with how we wish it to be.”― Carl Sagan

“Are we willing to tolerate ignorance and complacency in matters that affect the entire human family?”― Carl Sagan

“For me, it is far better to grasp the Universe as it really is than to persist in delusion, however satisfying and reassuring.” – Carl Sagan

“I am often amazed at how much more capability and enthusiasm for science there is among elementary school youngsters than among college students.” – Carl Sagan

“We tend not to be especially critical when presented with evidence that seems to confirm our prejudices.”― Carl Sagan

“Imagination will often carry us to worlds that never were, but without it we go nowhere.” – Carl Sagan

“Science is not only compatible with spirituality; it is a profound source of spirituality.” – Carl Sagan

“If we long to believe that the stars rise and set for us, that we are the reason there is a Universe, does science do us a disservice in deflating our conceits?” – Carl Sagan

“Personally, I would be delighted if there were a life after death, especially if it permitted me to continue to learn about this world and others, if it gave me a chance to discover how history turns out.” – Carl Sagan

“Skeptical scrutiny is the means, in both science and religion, by which deep thoughts can be winnowed from deep nonsense.” – Carl Sagan

“The notion that science and spirituality are somehow mutually exclusive does a disservice to both.”― Carl Sagan

“Frederick Douglass taught that literacy is the path from slavery to freedom. There are many kinds of slavery and many kinds of freedom, but reading is still the path.” – Carl Sagan

“We have also arranged things so that almost no one understands science and technology. This is a prescription for disaster. We might get away with it for a while, but sooner or later this combustible mixture of ignorance and power is going to blow up in our faces.” – Carl Sagan

“All of the books in the world contain no more information than is broadcast as video in a single large American city in a single year. Not all bits have equal value.” – Carl Sagan

“There are naive questions, tedious questions, ill-phrased questions, questions put after inadequate self-criticism. But every question is a cry to understand the world. There is no such thing as a dumb question.” – Carl Sagan

“A book is made from a tree. It is an assemblage of flat, flexible parts (still called “leaves”) imprinted with dark pigmented squiggles. One glance at it and you hear the voice of another person, perhaps someone dead for thousands of years.

“We can judge our progress by the courage of our questions and the depth of our answers, our willingness to embrace what is true rather than what feels good.” – Carl Sagan

“A celibate clergy is an especially good idea, because it tends to suppress any hereditary propensity toward fanaticism.” – Carl Sagan

“If you wish to make an apple pie from scratch, you must first invent the universe.” – Carl Sagan

“I think if we ever reach the point where we think we thoroughly understand who we are and where we came from, we will have failed.”― Carl Sagan

“For all our failings, despite our limitations and fallibilities, we humans are capable of greatness.”― Carl Sagan

“I can find in my undergraduate classes, bright students who do not know that the stars rise and set at night, or even that the Sun is a star.” – Carl Sagan

“Who is more humble? The scientist who looks at the universe with an open mind and accepts whatever the universe has to teach us, or somebody who says everything in this book must be considered the literal truth and never mind the fallibility of all the human beings involved?” – Carl Sagan

“It is far better to grasp the universe as it really is than to persist in delusion, however satisfying and reassuring.” – Carl Sagan

“You’re an interesting species. An interesting mix. You’re capable of such beautiful dreams, and such horrible nightmares. You feel so lost, so cut off, so alone, only you’re not. See, in all our searching, the only thing we’ve found that makes the emptiness bearable, is each other.” – Carl Sagan

“Science is an ongoing process. It never ends. There is no single ultimate truth to be achieved, after which all the scientists can retire.”― Carl Sagan

“I would love to believe that when I die I will live again, that some thinking, feeling, remembering part of me will continue. But as much as I want to believe that, and despite the ancient and worldwide cultural traditions that assert an afterlife, I know of nothing to suggest that it is more than wishful thinking.” – Carl Sagan

“For small creatures such as we the vastness is bearable only through love.” – Carl Sagan

“The truth may be puzzling. It may take some work to grapple with. It may be counterintuitive. It may contradict deeply held prejudices. It may not be consonant with what we desperately want to be true. But our preferences do not determine what’s true.” – Carl Sagan

“Our species needs, and deserves, a citizenry with minds wide awake and a basic understanding of how the world works.” – Carl Sagan

“The nitrogen in our DNA, the calcium in our teeth, the iron in our blood, the carbon in our apple pies was made in the interiors of collapsing stars. We are made of star stuff.” – Carl Sagan

“The universe is a pretty big place. If it’s just us, seems like an awful waste of space.” – Carl Sagan

“We’ve arranged a civilization in which most crucial elements profoundly depend on science and technology.” – Carl Sagan

“When you make the finding yourself – even if you’re the last person on Earth to see the light – you’ll never forget it.” – Carl Sagan

“But I try not to think with my gut. If I’m serious about understanding the world, thinking with anything besides my brain, as tempting as that might be, is likely to get me into trouble.” – Carl Sagan

“How is it that hardly any major religion has looked at science and concluded, ‘This is better than we thought! The Universe is much bigger than our prophets said, grander, more subtle, more elegant?’ Instead they say, ‘No, no, no! My god is a little god, and I want him to stay that way.’ A religion, old or new, that stressed the magnificence of the Universe as revealed by modern science might be able to draw forth reserves of reverence and awe hardly tapped by the conventional faiths.” – Carl Sagan

“Every one of us is, in the cosmic perspective, precious. If a human disagrees with you, let him live. In a hundred billion galaxies, you will not find another.”– Carl Sagan

“If God is omnipotent and omniscient, why didn’t he start the universe out in the first place so it would come out the way he wants? Why’s he constantly repairing and complaining? No, there’s one thing the Bible makes clear: The biblical God is a sloppy manufacturer. He’s not good at design, he’s not good at execution. He’d be out of business, if there was any competition.” – Carl Sagan

It doesn’t happen as often as it should, because scientists are human and change is sometimes painful. But it happens every day. I cannot recall the last time something like that happened in politics or religion.”– Carl Sagan

“We are fortunate: we are alive; we are powerful; the welfare of our civilization and our species is in our hands. If we do not speak for Earth, who will? If we are not committed to our own survival, who will be?”― Carl Sagan

“In science it often happens that scientists say, ‘You know that’s a really good argument; my position is mistaken,’ and then they would actually change their minds and you never hear that old view from them again. They really do it.

“The brain is like a muscle. When it is in use we feel very good. Understanding is joyous.” – Carl Sagan

“The brain is like a muscle. When it is in use we feel very good. Understanding is joyous.”― Carl Sagan

“What a marvelous cooperative arrangement – plants and animals each inhaling each other’s exhalations, a kind of planet-wide mutual mouth-to-stoma resuscitation, the entire elegant cycle powered by a star 150 million kilometers away.” – Carl Sagan

“We are privileged to live in, and if we are lucky to influence, one of the most critical epochs in the history of the human species.”― Carl Sagan

Do you love Carl Sagan quotes? If you love then please don’t forget to share this quotes with your friends.